Climbing to the top, meeting life’s challenges and helping other along the way…

The list of Laurie Bagley’s accomplishments is staggering. She has summited the world’s tallest mountains. was inducted into the California  Outdoors Hall of Fame, has completed numerous marathons and is a top-finisher in adventure races. She cycles, backpacks, skate skies and snowshoes. It’s an enormous understatement to say that Bagley is active. She builds exercise into every day and doesn’t sit still for long. Yet the lean and fit 50-year-old athlete has experienced a shift in her life, a shift that has led her away from the competitiveness that drove her for so many years. She’s done competing, she says, but she’ll never be done enjoying the outdoors and activities she loves.

Her attitude adjustment occurred shortly after she reached the summit of Mt. Everest (29,035 feet) in May 2006, when she became the 6th American woman to do so from the Tibet ( North Col) side and the 26th woman to summit from all routes. It was a dream that has consumed her for a long time. “When I got back, I was in a bit of a quandary about where my life was headed, but I know climbing the next mountain wasn’t on the list,” she said. “What had mattered before to me had changed.” she added. “I switched from competitive endurance goals to more career-oriented and parenting goals.” 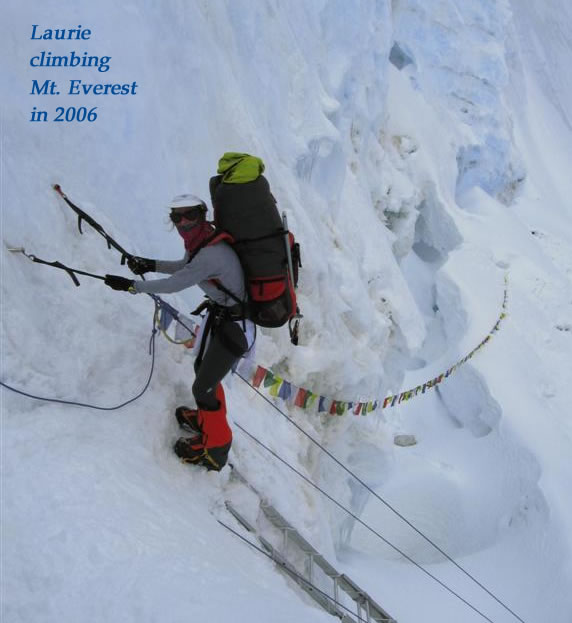 No longer trapped by the need to compete, Bagley found herself free to explore new options. The prospect of helping other achieve their goals was appealing, so she began evaluating her own goal-setting ideas and personality. Then she launched a business , Life Journeys (now known as health-fitness-coaching.com).

These days, The Lake Shastina resident offers a diverse array of services, including goal-setting workshops, inspirational and motivational speaking, fitness coaching, health/wellness programs and seminar facilitation. She works with corporations, nonprofits, small businesses and individuals. “I love all of it”, she says. “I reach enough people that it feels worthwhile. I feel like I’m making a difference.”

Bagley has lots of experience in accomplishing huge goals, but her approach to  reaching them is rather simple. “Accomplishing a big goal is all about breaking it down into smaller, one-step-at-a-time pieces. this will take you to your highest potential,” she says.

Joy Taylor, coordinator of the Sustainable Communities program at College of the of Siskiyous and a private small business development consultant, hired Bagley as a personal fitness coach. She trained me and helped me prepare for summiting Mt. Shasta,” said Taylor, a personal friend and COS colleague of Bagley’s.  But Taylor stresses that Bagely helps people accomplish goals at levels. “She has the ability to customize programs to each client. She’s an extremely intuitive person who can work with people where they are. She’s very realistic in developing a plan they can achieve one step at a time. ” Taylor said.

She guides for Adventures International and Call of the Wild, as well as whitewater river trips. In addition she teaches Outdoor Adventure Leadership Skills through CO’s Environmental Resources department. She recently returned from a three-week trip to Nepal, where she helped guide trekkers to the Mt. Everst base camp at 18,700 feet, a 10-to-12 day feat that she says is physically, but not technically, demanding. “We go at a slow pace so they can acclimate to the elevation,” she said. Part of the group continued up, attempting to reach the summit with two high-altitude guides and Bagley led the trekking – only group back down.

Before departing for her recent trip, Bagley said she would seek philanthropic projects in Nepal. “The opportunities are present everywhere. It’s endless, the need ,” she said. “This time I’m going over there with those eyes.” Bagley like so combine charity with her projects. During her Everest effort, she donated some of the money she raised to KIRF India, a charitable trust based in Mount Shasta that provides health and education assistance for poor communities in India. “I wanted to go over there with a bigger purpose,” she said.

For 16 years, Bagley has lived in Siskiyou County, a place that feeds her soul. “I see Mount Shasta as a very connected, wonderful outdoor mecca. It’s a great place to be,” she said. Her north state roots run deep. When Bagley was 10 years old, her family moved to Redding from Colorado. She attended Sequuoia Middle School and Shasta High School District. Bagley has two siblings – a brother, a former Blackhawk helicopter pilot who now lives in Alabama, and a sister, an administrator at Anderson High School.

Jean Bagley said her daughter’s high energy level presented early in life, and she was involved in sports, music, cheer leading, gymnastics and lots more. “She’s very self-motivated. I’ve seen her achieve a lot of things,” Jean Bagley said. “She’s an incredible athlete; she just has this gift.” But she also offers a bit of advice. “I tell people not to go on a bike ride with her unless they’re an experienced rider.” which can turn out to be a 20-mile ordeal, her mother said.

Laurie Bagley, who says her parents have always emotionally supported her endeavors, discovered the joy of running while in school and quickly gravitated to the long-distance events. She also indulged in bicycling and hiking. “I always had an innate, unexplained desire to explore those things”she said. “I don’t understand it myself. I was just in my element, and I loved it.”

Participating in  outdoor activities gives Bagley something that nothing else can. “Exercise is my meditation and my sanity. I don’t exercise to maintain a body image; my whole mental and physical makeup functions so much better. It keeps me focused and balanced.”

After high school, Bagley earned a degree in psychology and recreation therapy at Chico State University. Since then, She’s added three teaching credentials to her resume and a master’s degree in outdoor leadership from Southern Oregon University. She’s taught school in Colorado, Oregon and California.

Amid all the climbing, trekking, biking, speaking, teaching and the like, Bagley found time to write a book, aptly named.  “Summit! One Woman’s Mount Everest Climb Guides you to Success”, which was released late last year. “Summit! coordinates with Bagley’s workshops and presentations, Bagley will tell you that finishing that book was one of the most difficult and challenging things she’s ever done. Originally relying on the expertise of ghostwriters, Bagley ended up finishing the last half of the book on her own. She considered abandoning the project because she never saw herself as a writer and lacked experience. But she found a publisher that gave her assistance and support from a writing coach. “I’m so glad I stuck with it. I’m so grateful that I had the chance to overcome my fears. I’m not afraid of mountains, but I was afraid of finishing that book,” she said.

A self-admitted risk-taker, Bagley says it’s not unusual for her to jump off a cliff.  “I would be unhappy if I chose the safe and solid path,”she says. “She has a gift of living fearlessly,” Taylor said of her friend, whom she describes as humble, generous and sincere. “In the 10 years I’ve known her, I’ve seen Laurie identify what she wants, commit to it and do what it takes to get there, on both personal and professional levels. She walks her talk. She’s very authentic.”

This website uses cookies to improve your experience while you navigate through the website. Out of these cookies, the cookies that are categorized as necessary are stored on your browser as they are essential for the working of basic functionalities of the website. We also use third-party cookies that help us analyze and understand how you use this website. These cookies will be stored in your browser only with your consent. You also have the option to opt-out of these cookies. But opting out of some of these cookies may have an effect on your browsing experience.
Necessary Always Enabled
Necessary cookies are absolutely essential for the website to function properly. This category only includes cookies that ensures basic functionalities and security features of the website. These cookies do not store any personal information.
Non-necessary
Any cookies that may not be particularly necessary for the website to function and is used specifically to collect user personal data via analytics, ads, other embedded contents are termed as non-necessary cookies. It is mandatory to procure user consent prior to running these cookies on your website.
SAVE & ACCEPT
Go to Top